The Crusoe Revisited: Many Distros

(This is part of a series of posts regarding my revisit of the Fujitsu Lifebook P1120 that I got a few months ago, with the Transmeta Crusoe processor. As new posts come out, I’ll add links to the other parts here.)

When I was looking up the Crusoe CPU, I found a page that showed a ton of links to reports about how Linux ran on the Crusoe. I even found a page from someone with the same laptop!

I was going to install Mandrake like they did, but I spent a few hours trying to get it to even get past the first stage of the setup. Meanwhile, I grabbed Ubuntu 5.10, which this guy ended up upgrading to a year or so after getting the Crusoe. Mandrake was awful to get network booting, but Ubuntu? I just bind-mounted the netboot folder off of the ISO to overlay on top of my existing PXE booting folders, and ta-da, instantly worked. Gave it the archived 5.10 apt repo, and it seems to be working fine so far. Based on other links I’ve found in my searches, Fedora Core 1 and 2 will run fine, and Debian 3.0 has support for this as well. 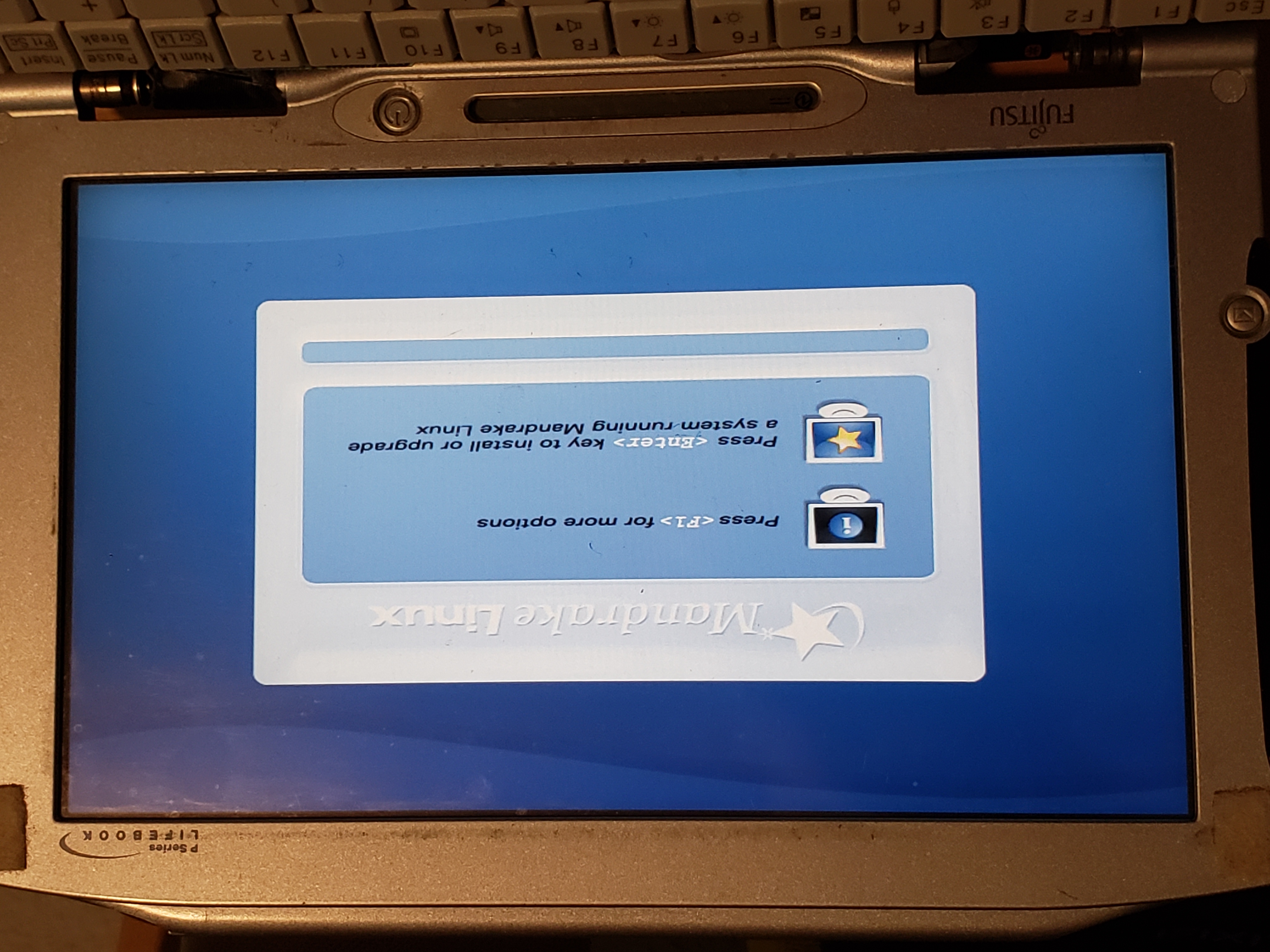 Something I did notice that was mentioned on every page, was you NEED a special partition for hibernate to work properly. As I don’t take this anywhere, I don’t think I need that. I will look into it later on.

Ubuntu has finished its first stage of the install, and rebooted with no issue. I did notice (and it was said on the first page linked), that the kernel Ubuntu selected was the i686 one. That won’t work here, at least not for long. I need a i586 or lower kernel. The second stage is going along well, though watching the output of apt shows that things are complaining about Illegal Instruction, and I got a kernel OOPS, but no crash!

This second stage took about an hour to complete, around 850 more packages were installed.

Once it was all done though, everything worked! Right away even. However it’s quite slow.

Before I commit to trimming down Ubuntu, I wanted to check out Debian 3.0, and see how that performs with a 2.4 kernel instead of 2.6. Likely an unfair comparison, but worth trying. 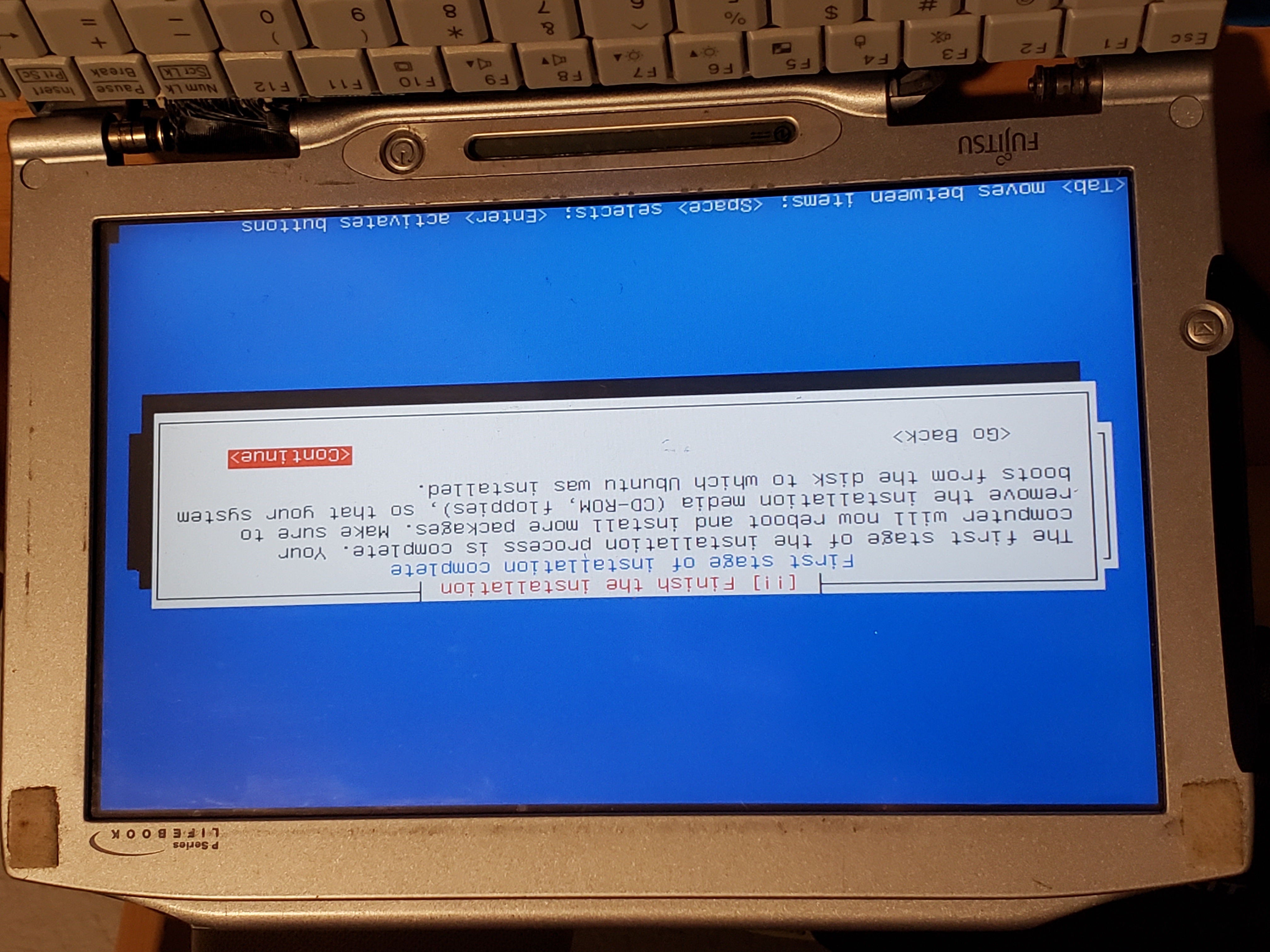 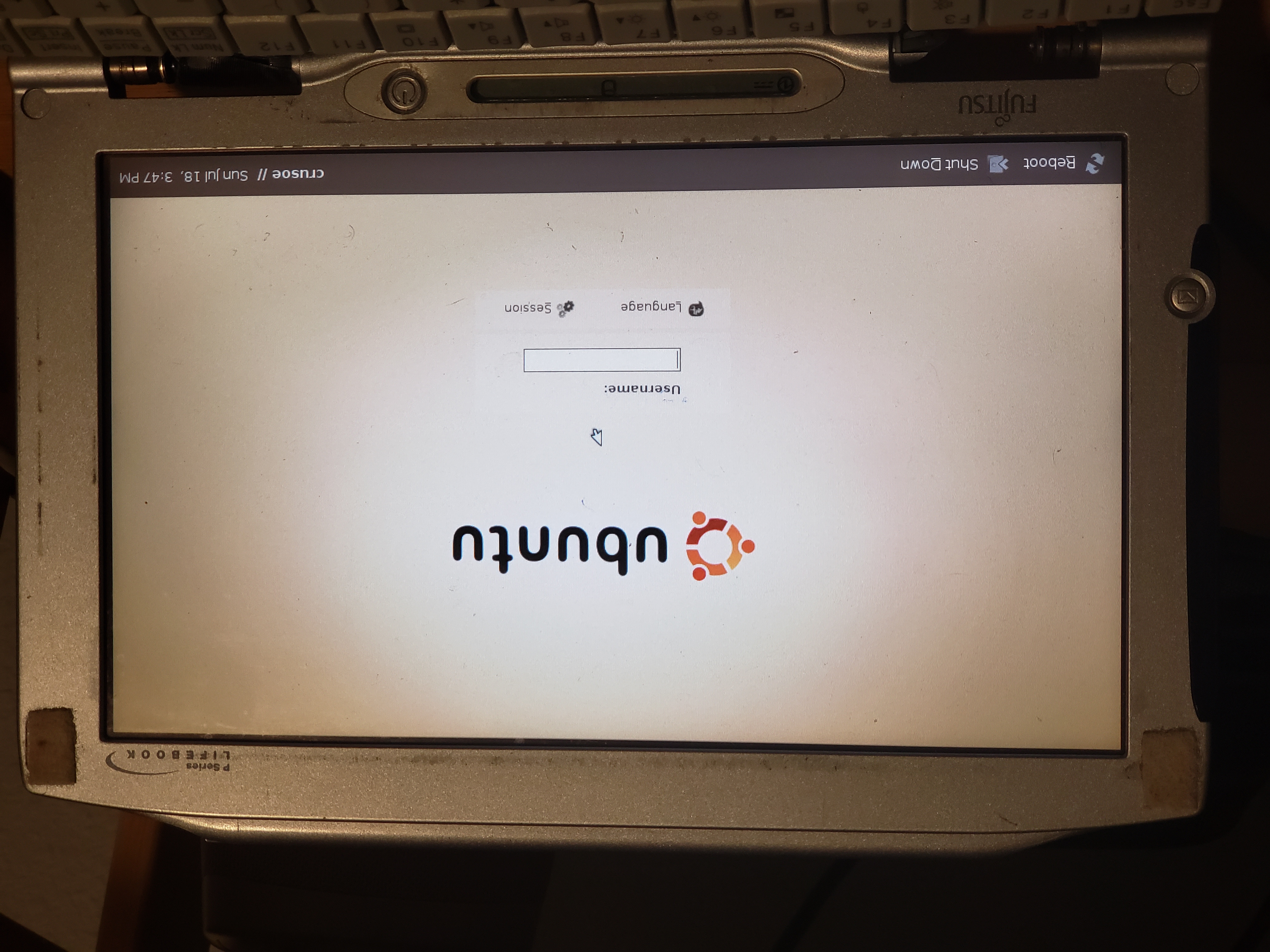 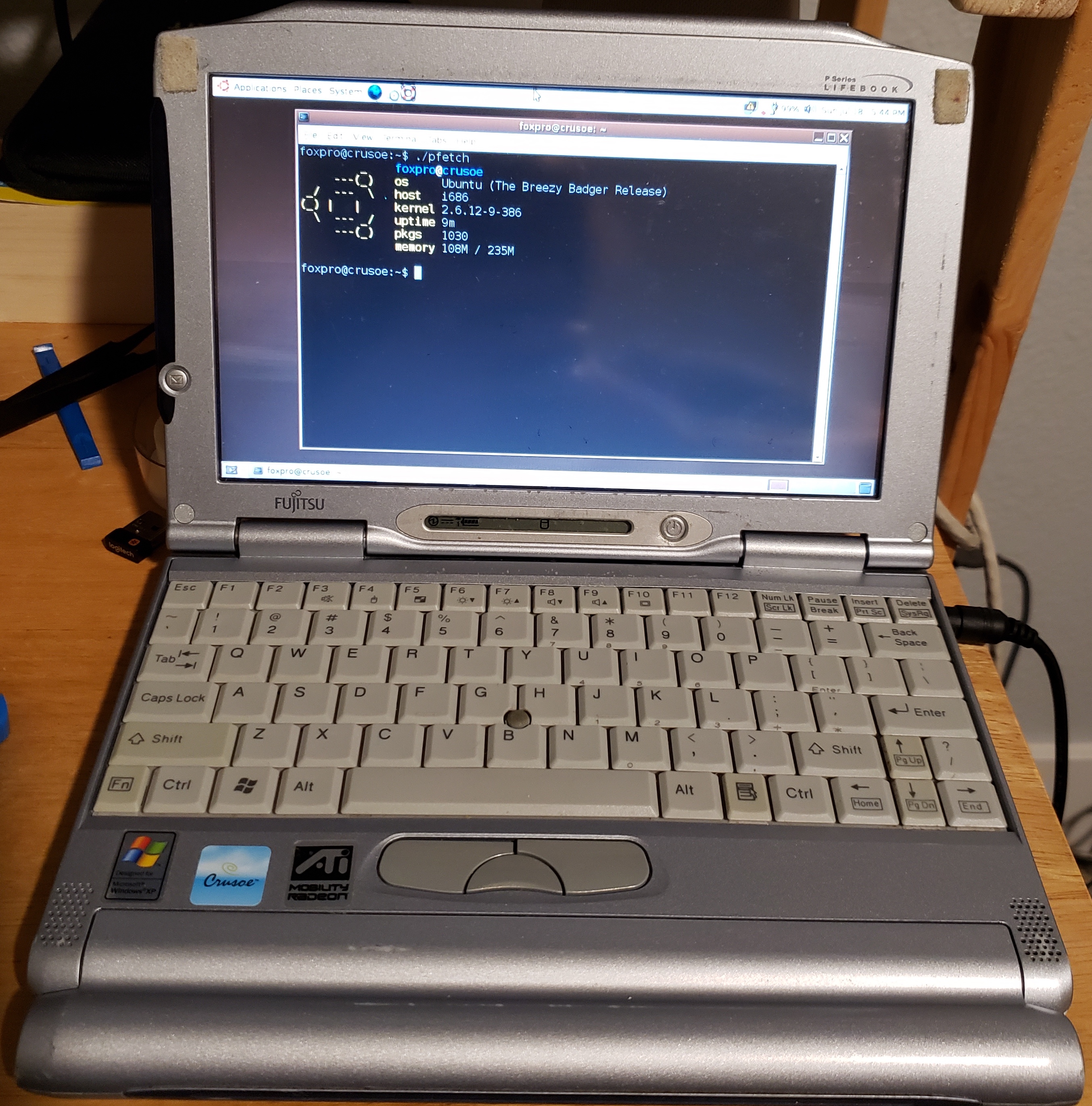 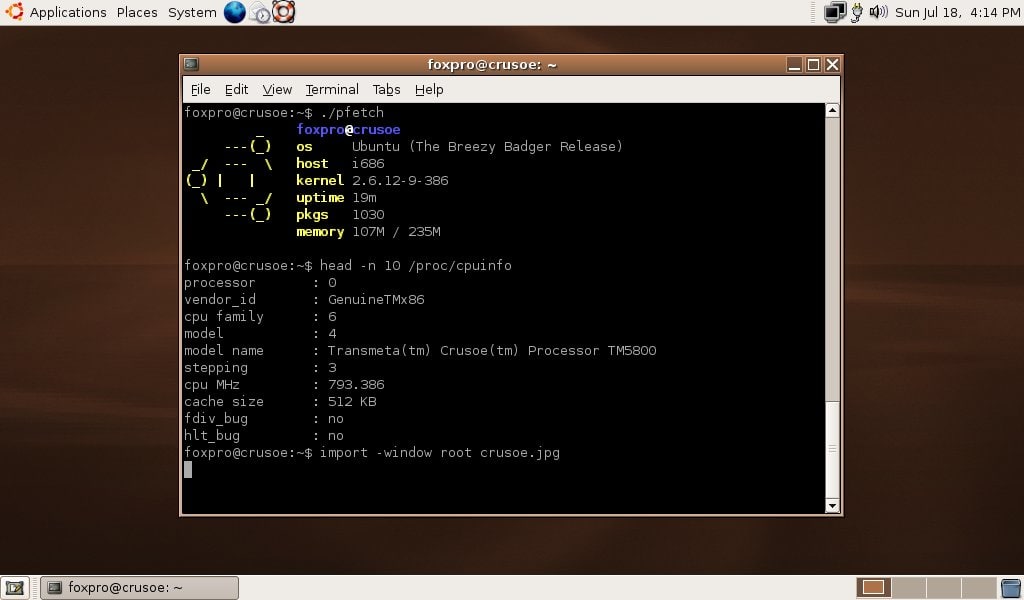 Turns out, Debian 3.0, even the latest release of it, only has XFree86 4.1, and it seems that radeon support was added in 4.3. I thought oh, I’ll just update to 3.1, and it’ll be fine. Except you can’t. I couldn’t find any full iso sets like I could for 3.0. Since the online apt repos are far gone for 3.1, I need the distribution in CD form, so I can throw all those in a folder and call that my apt repo. There existed a separate repo that the people of the past used to get XF86 4.3 on Debian 3.0, but it’s long gone and the version on the Internet Archive is 4.2, not 4.3.

I got some warm reboot times (so the CMS had cached some instructions), it takes:

I talked to some friends and it occured to me that I could just… Update Debian 3.0 to 3.1, and get all the updated packages that I needed. Debian, like Ubuntu, have frozen apt repositories for their old releases. So I just had to tell apt that I want the sarge repos this time, and it’s off, running a full dist-upgrade.

I have a feeling Debian will just work better in general on this machine, though I will keep Ubuntu on another hard drive for future testing, or other distros.

During the upgrade, it failed, saying one of the dpkg processes failed with code 1. I re-ran apt-get dist-upgrade and it continued on its merry way with no further errors. No idea what happened, probably some CMS bug.

We are now on Debian 3.1 Sarge! I just had to make sure the LILO config was correct and not leave me unbootable. X works, though I don’t have anything other than TWM installed, oops. Getting KDE now. 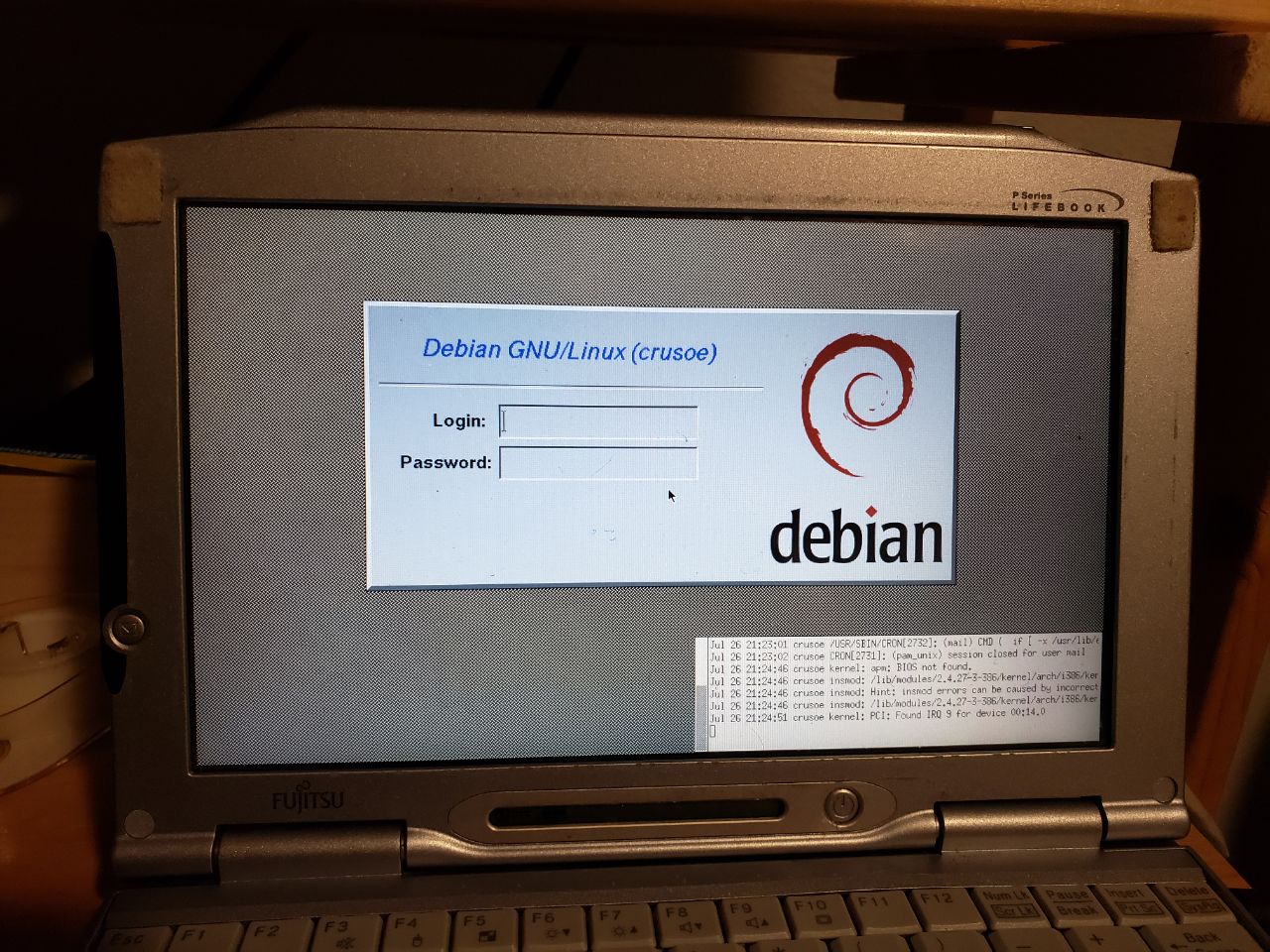 KDE 3.3.2 installed without a hitch, and runs okay fwiw. I need to compile a new kernel anyways as some options need to be set differently for Crusoe CPUs and other things specific to the Fujitsu. 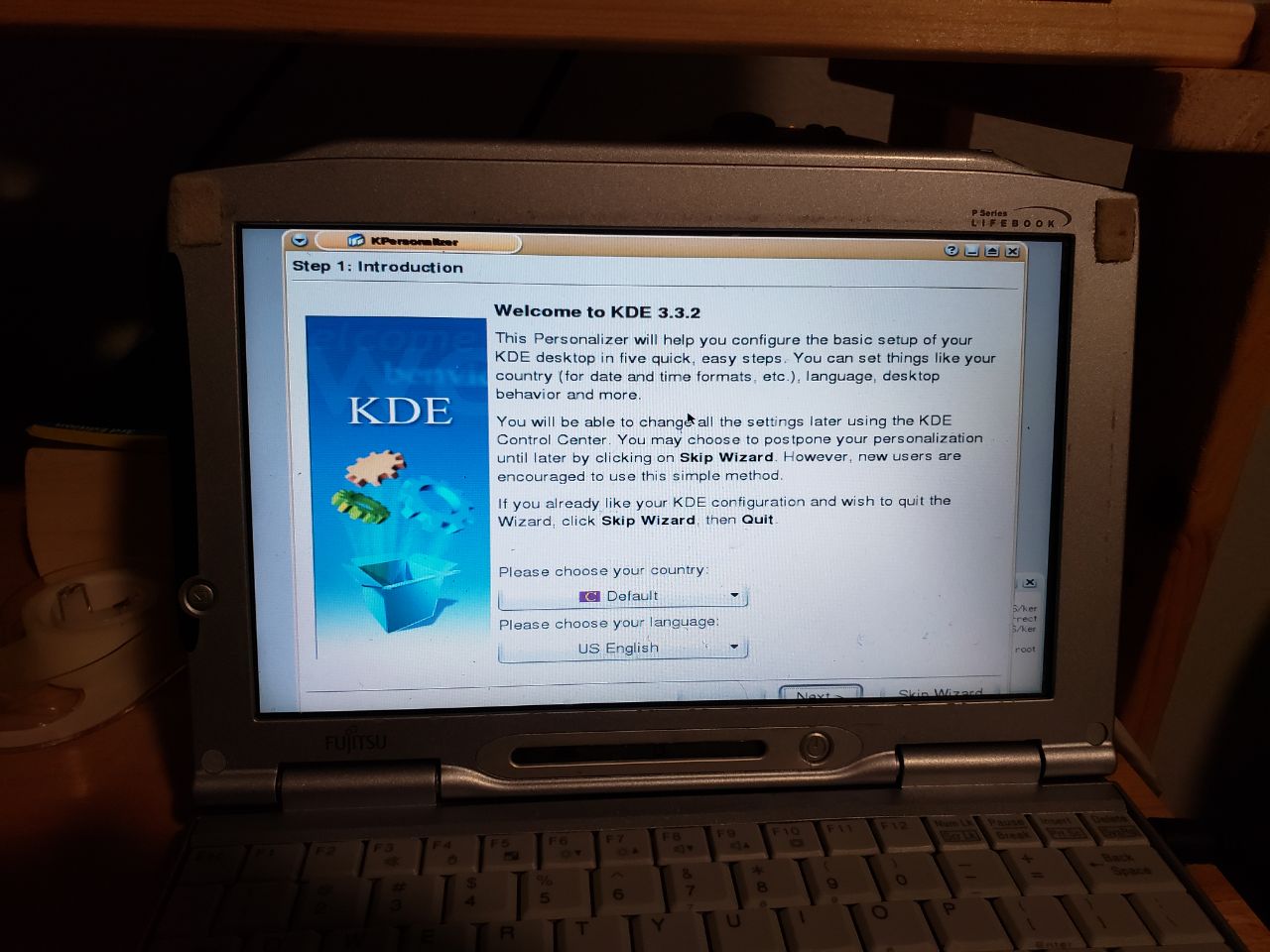 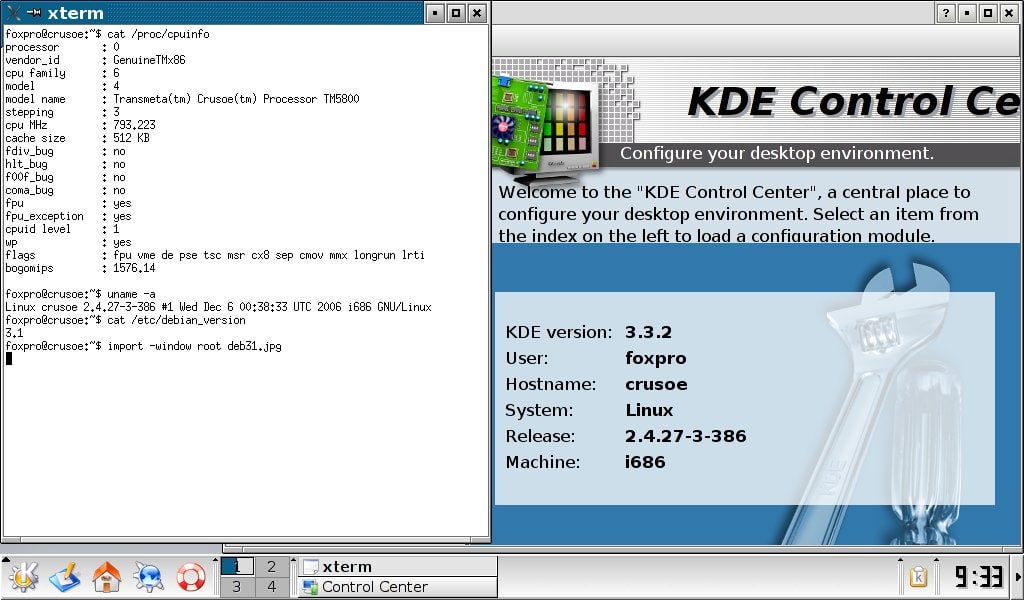 For I can never settle with this, I have blown out the slow Ubuntu 5.10 install to dual boot XP and try out some other stuff (I still have Debian 3.1 as my go to). 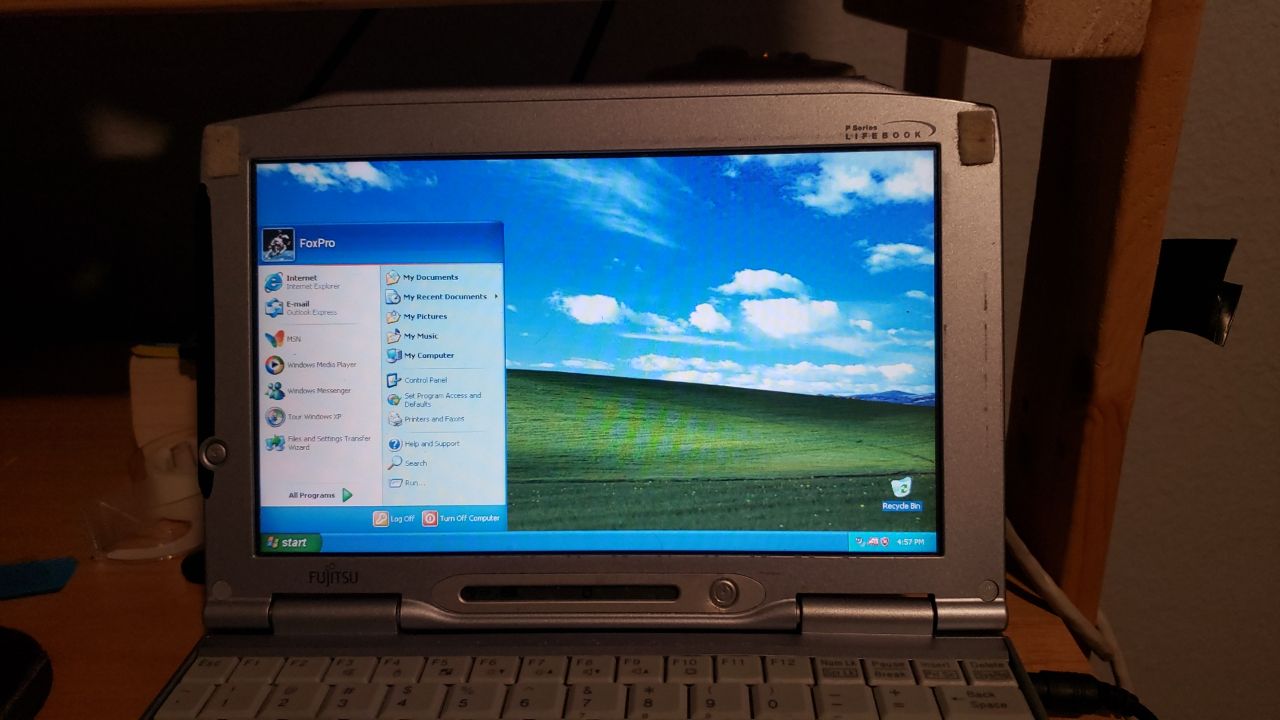 This time I am trying out AOSC/Retro. It doesn’t have a bootable installer, you have to boot another live environment and then extract the rootfs. Feels very gentoo-y, though AOSC is a Debian based distro. Relatively easy process, boot up a live environment, they recommend TinyCore, which I just so happen to have on my PXE server anyways. Extract tarball, mount /dev, /proc, /sys, and such from the host, chroot in and then apt update && apt full-upgrade.

At the time of this writing (July 29th, 2021), there was over 300 packages to be updated. It’s taking it’s sweet time. I had also just replaced the thermal pads with new ones today.

It locked up!! During the upgrade it decided to just keel over, no crash, but another lockup. XP did the same thing, I wasn’t sure why, but it prompted me to go ahead with replacing the thermal pads. 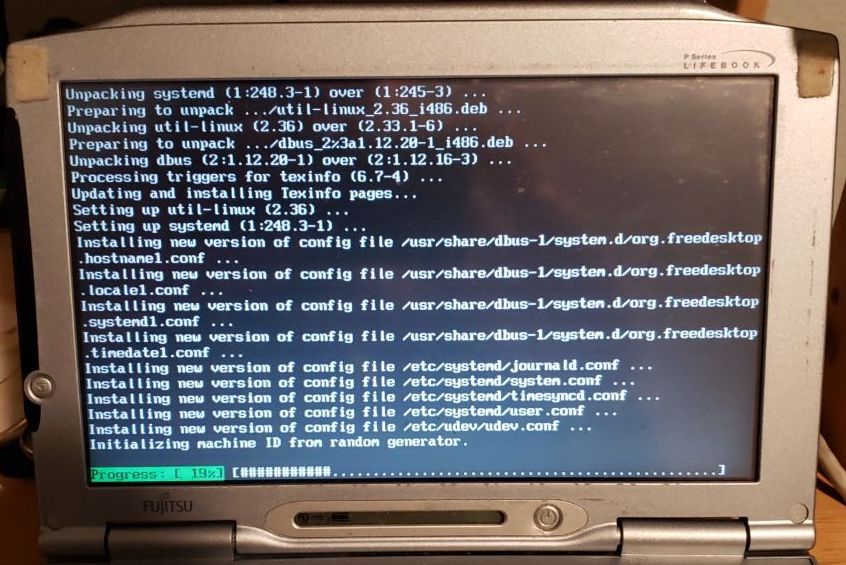 I had to force reboot and that took the filesystem with it, so I started fresh, and instead of updating immediately, I just finished the setup and will update afterwards. One thing I did notice though, other than the generated fstab including the zram swap from TinyCore, which caused issues as AOSC doesn’t use zram by default.

Still wasn’t smooth sailing, I had to get back into TinyCore because it tried to start X11 and I didn’t have any firmware for the R100 GPU, so I was left with a black screen. I installed the firmware packages, which provided the R100 GPU firmware, but it still wouldn’t load it? I looked at /lib/firmware/radeon and R100_cp.bin was there, but it was a .bin.xz. After un xz’ing it, it works. Kinda odd that the kernel that ships doesn’t support compressed firmwares by default.

AOSC ships with IceWM as its default WM for the Retro flavor. Immediately I noticed the very slow drawing of UI elements. It couldn’t even keep up with scrolling text in urxvt. I remembered that there was a way to switch the rendering engine for these older ATI chips, that being creating a 10-radeon.conf in your X configs with the following: 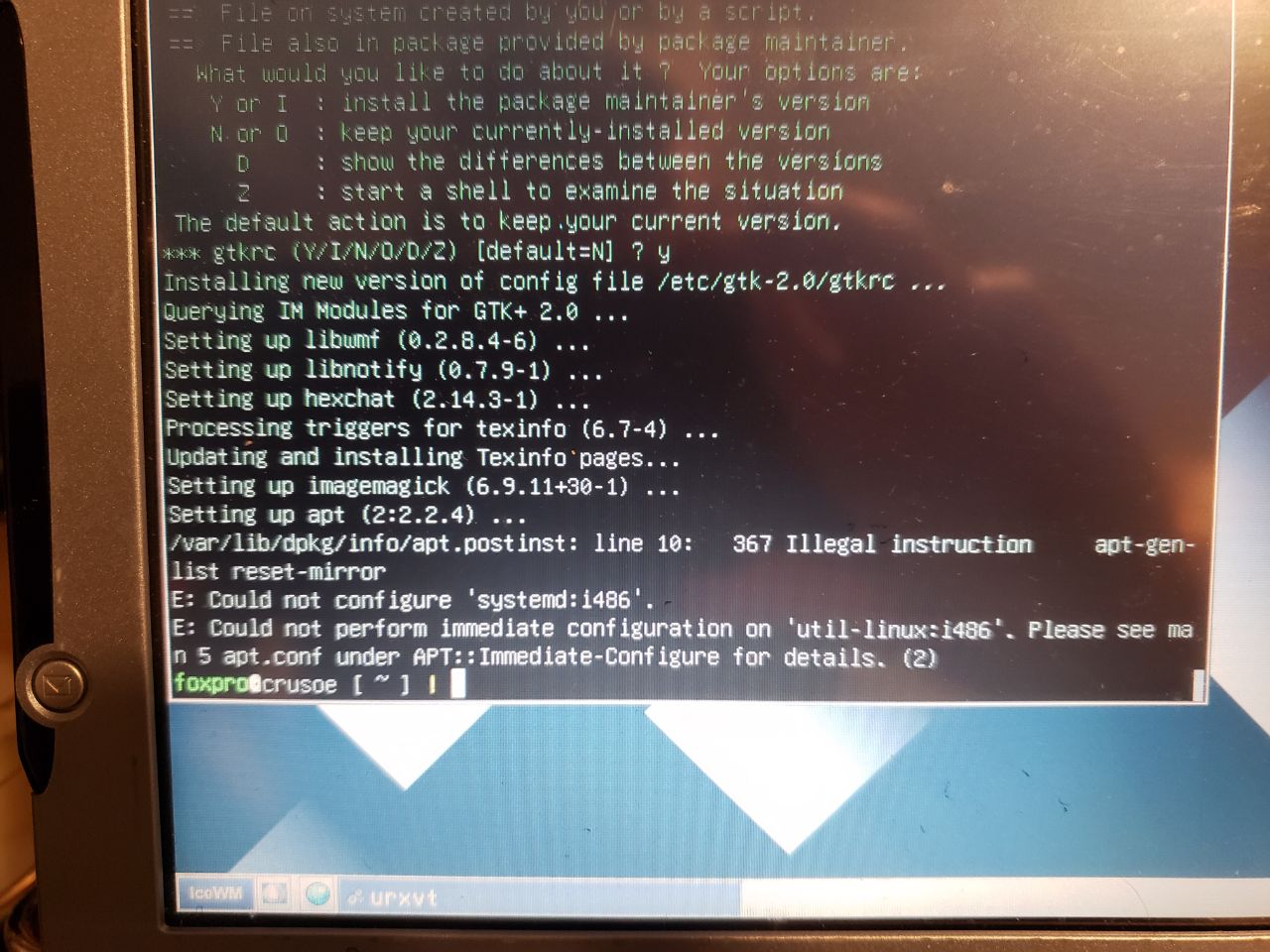 Unfortunately, AOSC/Retro had come into issues with the upgrade, it had an illegal instruction error, which rendered the system unusable! I could not login, via X or TTY. As such, I will move on from it, though it seems promising, I may just need to be more patient, or figure out how to fix whatever happened to this install.

For now, I’m putting the Crusoe back to sleep. I’ve been on this thing for about 3 weeks, and with no real breakthroughs in usability, I can’t keep spending time on it when there are other things to do. My future plans for it are another Gentoo attempt, either 2004.1 from a stage1, and build everything for i486. Or current Gentoo, also from a stage1. I’ve never done a stage1 install of Gentoo before, so it will be quite the learning process.