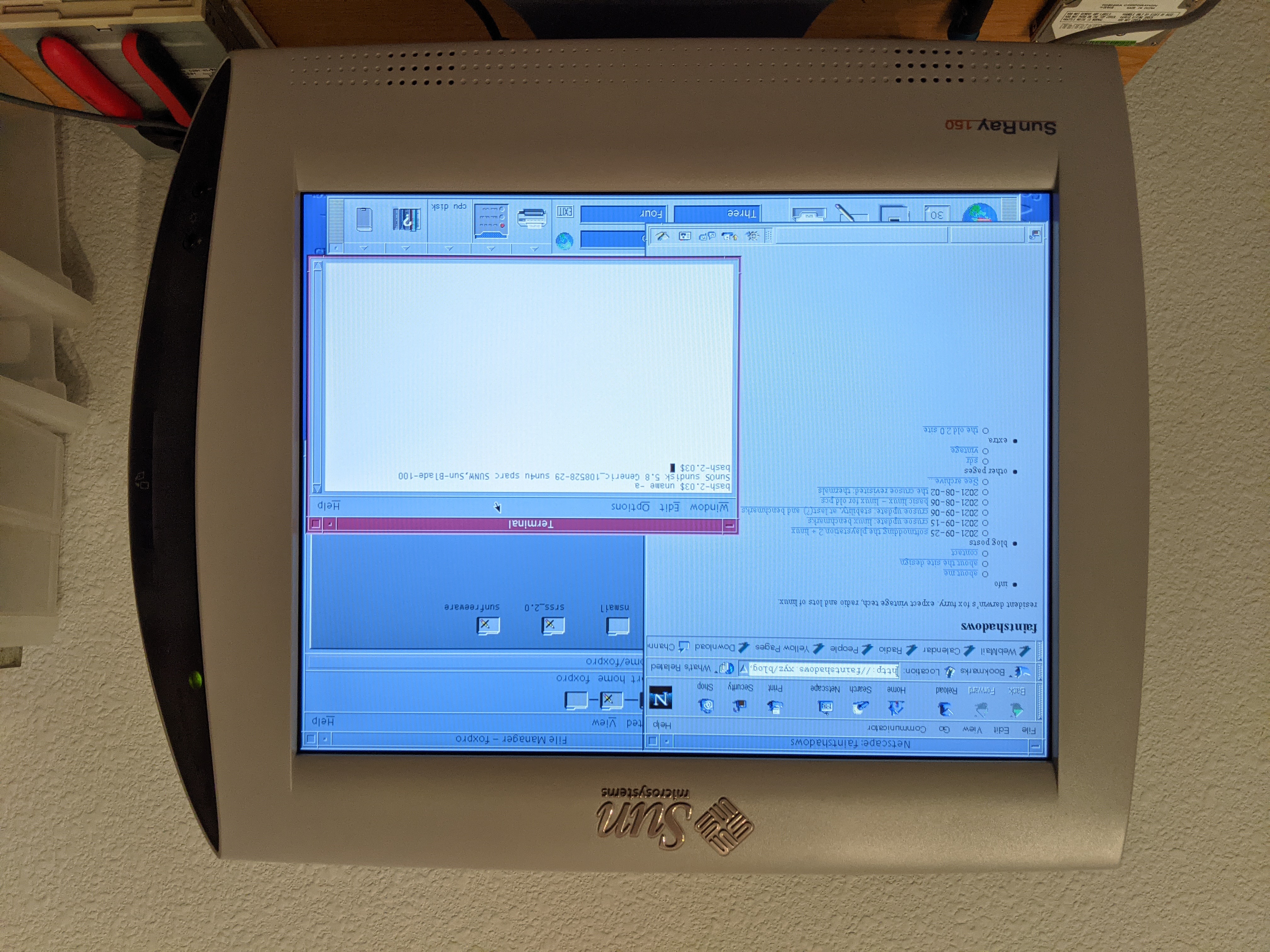 On a recent trip to visit my boyfriend, we both met up with a mutual friend, who was going to give me a brand new in box Sun Ray 150 “Ultra-Thin Client”.

Basically it’s an X Terminal, it can do nothing on its own, it requires a server with the Sun Ray Server Software (SRSS) present. This being Sun, it only runs on Solaris, and to a lesser extent (missing features), period specific Linux.

Specification wise, it uses a 100MHz SPARC IIep, and has 8MB of RAM. It has four audio ports, in glorious 16 bits. Blazing fast (100mbps) ethernet, and the wonderful Type 6 keyboard and accompanying mouse. Four USB ports are present, along with a SmartCard reader. The built in LCD is 1024x768, but it’s probably the nicest old display I’ve ever laid my eyes on. It has a “projector” port, which is just a VGA out that mirrors the display. Interestingly it has a composite in, for… video capture? I’m not entirely sure why. Regardless, it’s a nice piece of kit, however…

This was not fun to set up. Having to wade through the dying Unices of the early 2000s isn’t a particularly fun experience when documentation is limited and assumes you’re a career sysadmin for this specific Unix. But I like Slowaris, and I love me some Sun gear, especially BNIB.

Unlike most of my posts, I am writing this now AFTER it all works. So if you came for the long, drawn out posts that are 90% me suffering because nothing works and 10% actual informational content, sorry that’s not this post :P

To set up a Sun Ray Server, you need well, a server. I’m using my Sun Blade 100, though according to the hardware requirements, all you need is a 350MHz UltraSPARC, 256MB of RAM, and Solaris 8+. My Blade 100 is kitted out with a 500MHz UltraSPARC IIi, 1GB of RAM, and a fresh install of Solaris 8.

Originally I was going to use SRSS 1.3, but after installing and configuring it, I would lose local authentication! dtlogin would just spit out “Login incorrect” over and over. 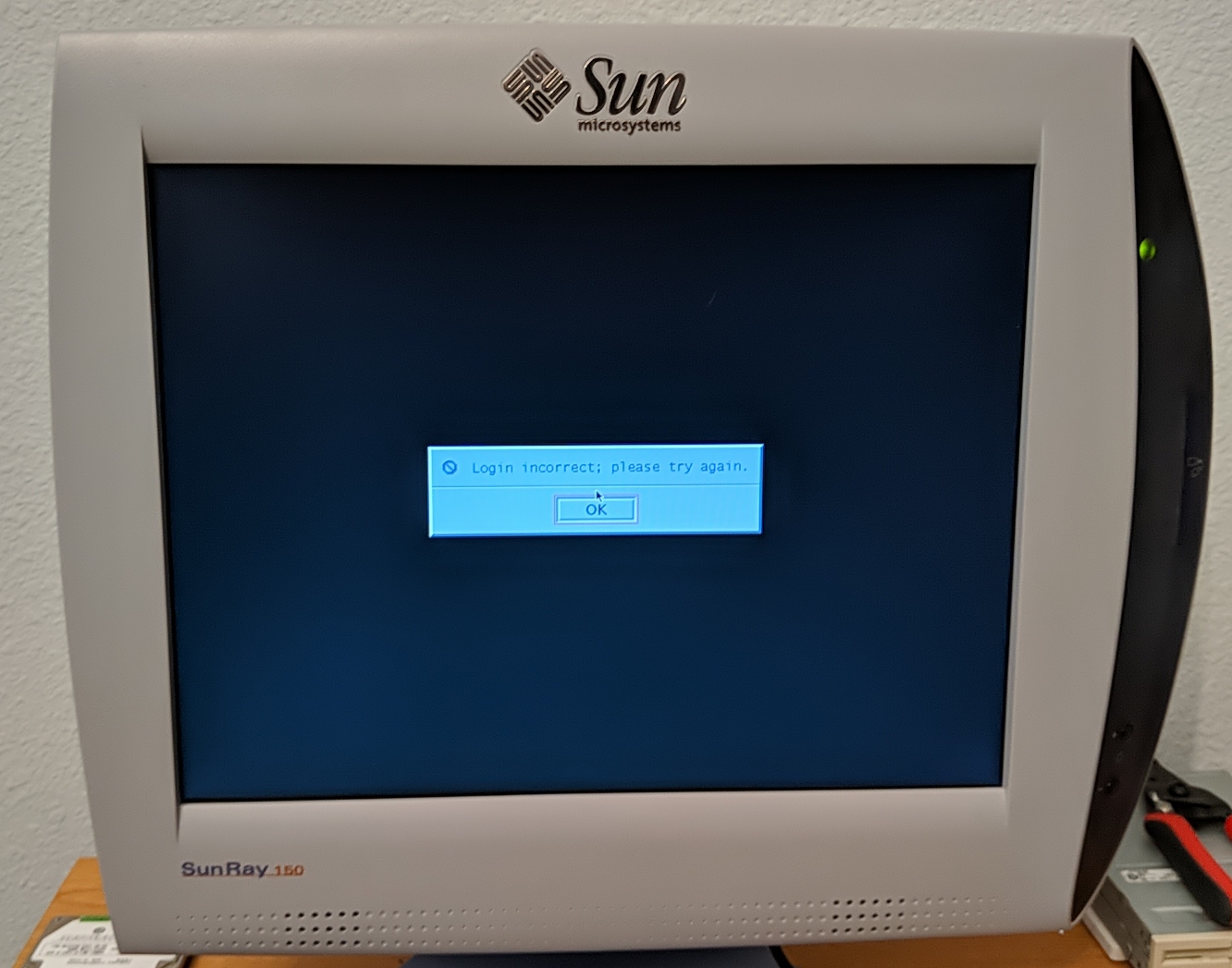 Fresh reinstall, same thing. I try SRSS 2.0, and login still works, I plug in the Sun Ray, and behold, dtlogin! 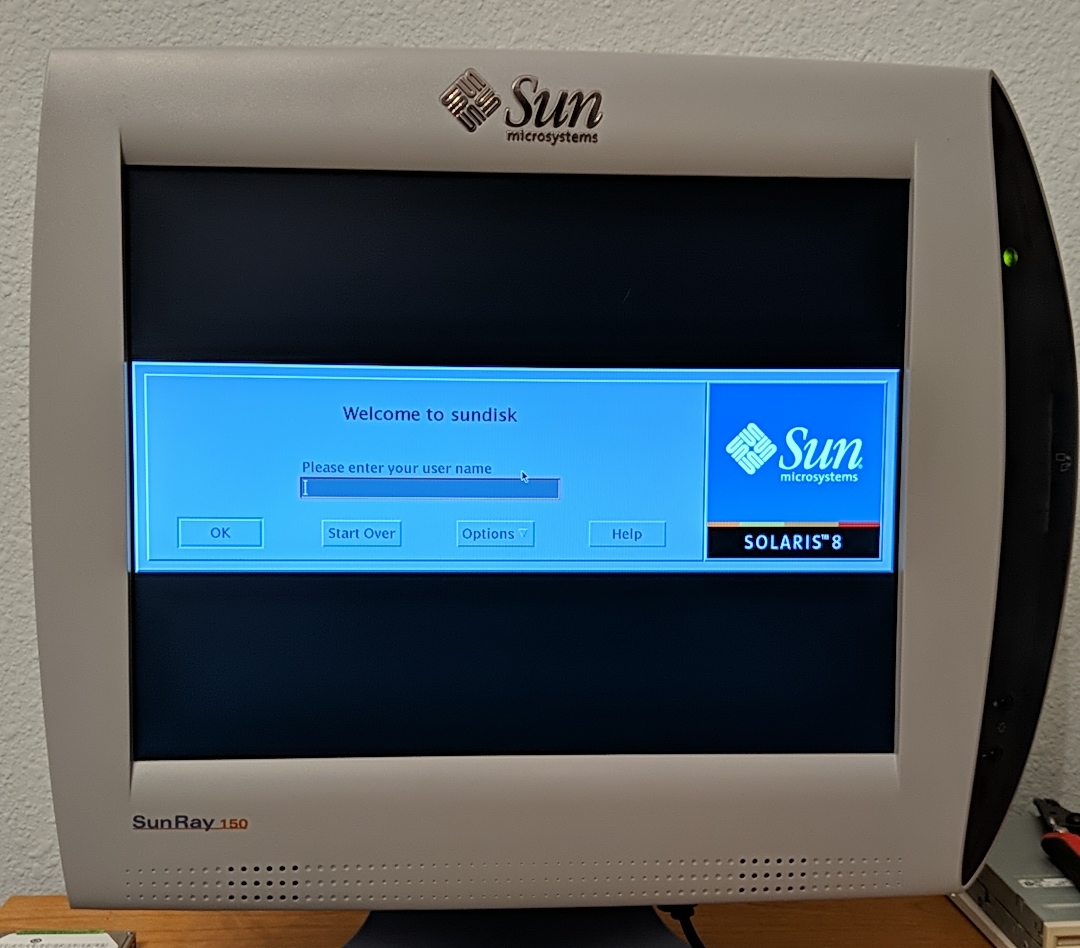 The installation documentation is included with SRSS, but I’ll go over it briefly for those who don’t want to read all that.

Mount the CDROM, or extract the archive, cd into the SRSS folder, run (as root) ./utinstall. The utinstall script will analyze your system to see if you need any patches and updates to the installed software, and then throw everything onto your filesystem. Something I learned the hard way, you do NOT reboot immediately after install completes! utinstall says to, but the docs say don’t! Sun, wtf!

The fun part. It’s so fun Sun gives you a worksheet to fill out just to keep track of it all!

It’s not too bad, though, you’re mostly being asked about your network topology. Which you can just accept defaults for in most cases. A lot of the worksheet is optional if you aren’t using SSL for the web configurator, and aren’t using other Slowaris boxes as failovers.

When configuring SRSS, you’ll be in the /opt/SUNWut/sbin directory.

utadm is the initial program you’ll execute, to set up the network interfaces for SRSS. The docs say to use ./utadm -a <iface>, but if you are on a shared network, you want to do -A <subnet>.

After that, you’ll run utconfig, which will configure the actual server software. You’ll be asked a majority of the questions from the worksheet (you did fill that out, right?). If you aren’t using SSL or failover, you’re done, and can NOW reboot.

Assuming all goes well, and you’re greeted with a functional dtlogin screen, you’re good to power on your Sun Ray. Interestingly, they don’t have you just do reboot, rather sync;sync;init 6. Which, okay fair that does like the same thing, but that’s some nice esoteric UNIX to finish us off with.

Picture time! I took some nice pics of it all set up and running, I’ll finish this post off with those. 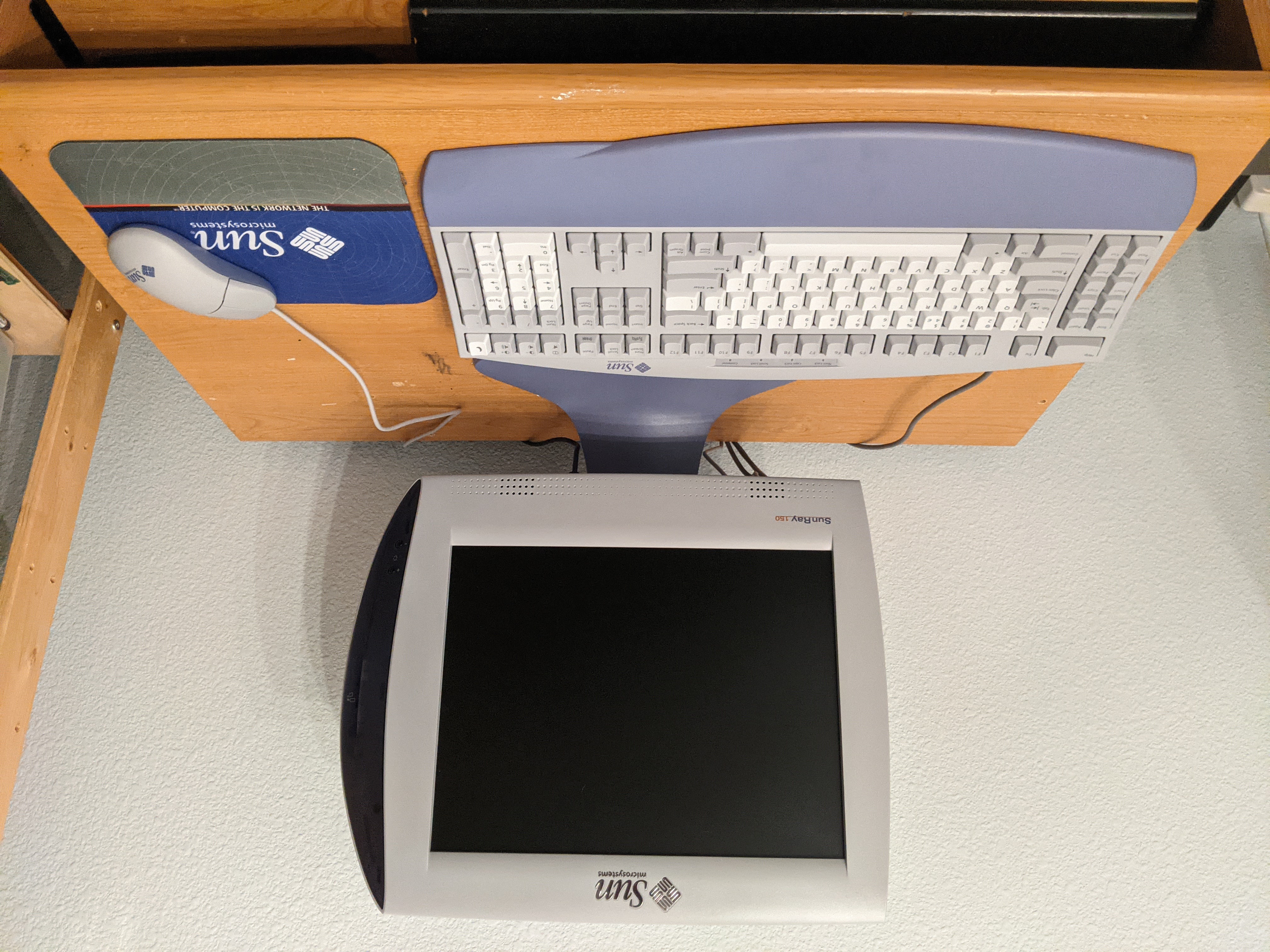 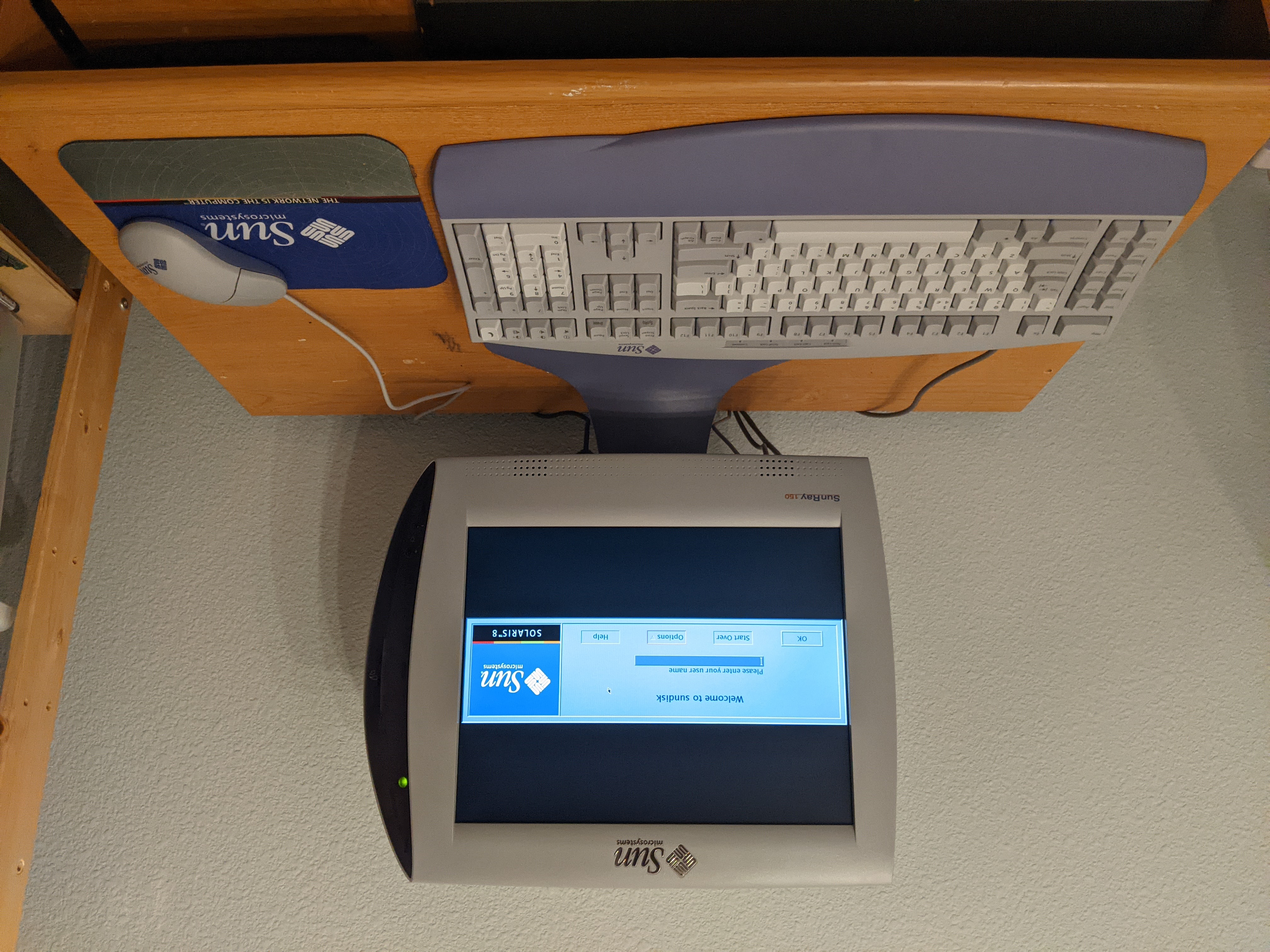 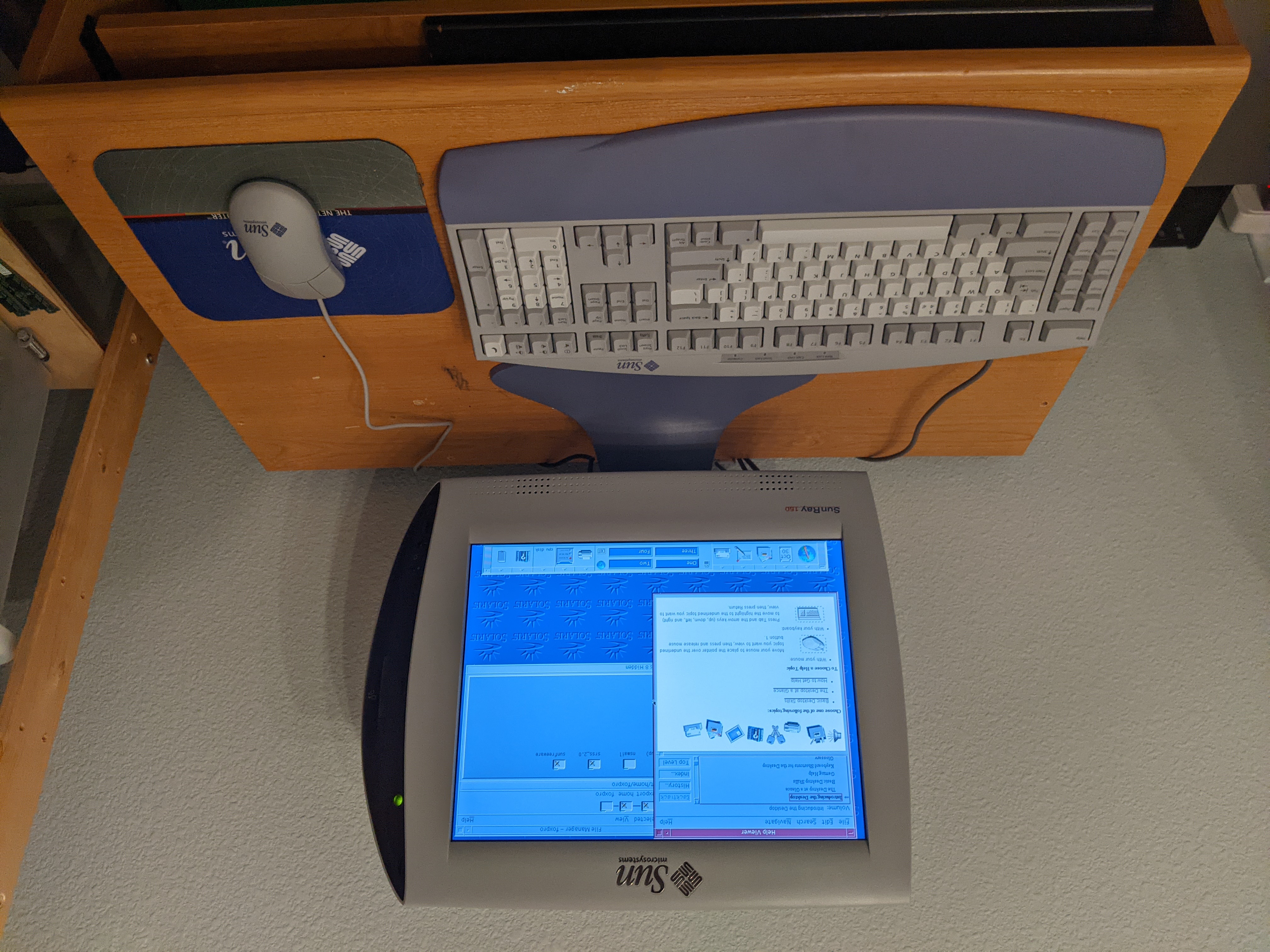 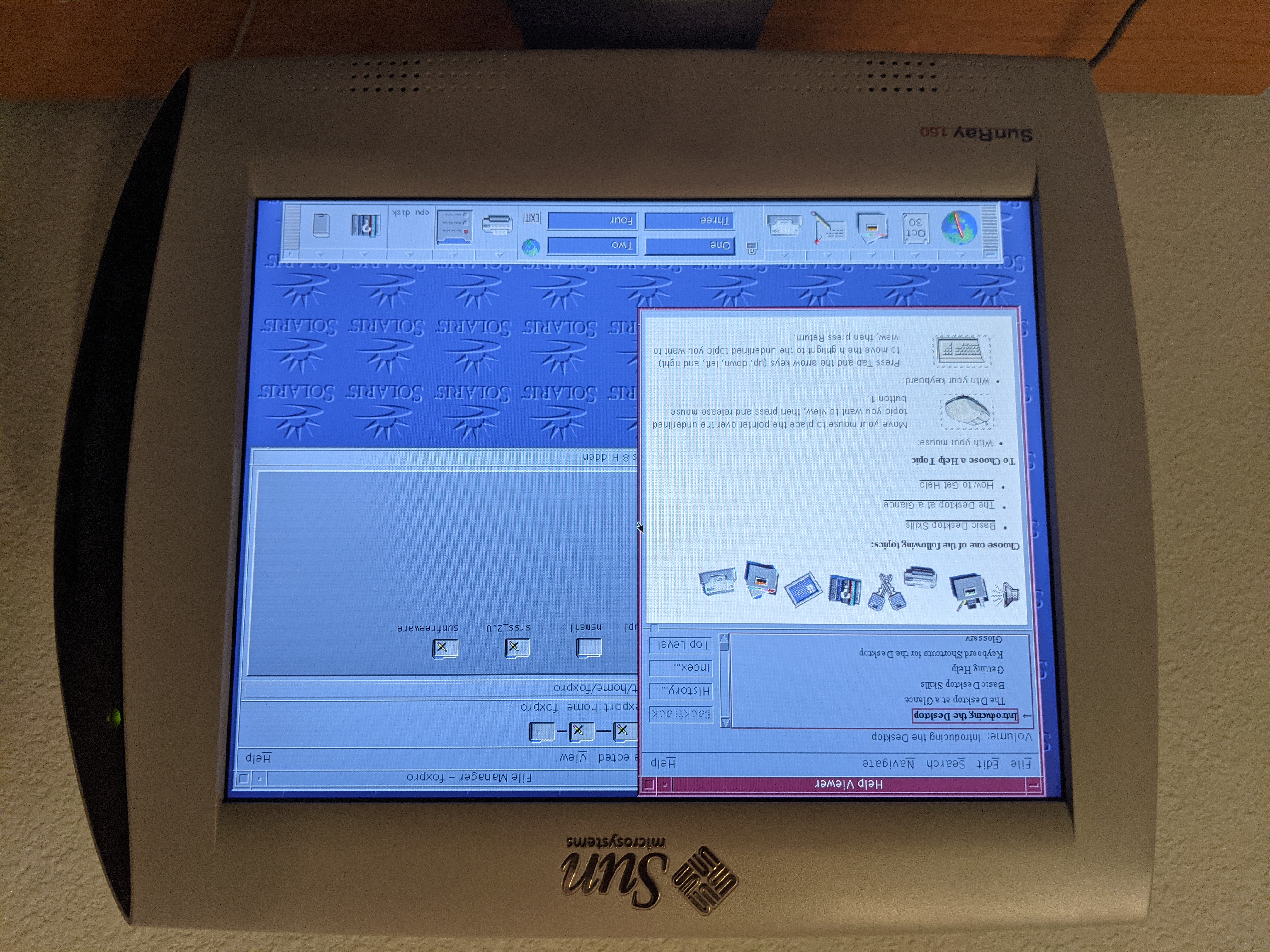 I don’t really know what I’m going to do with this? I am sure I’ll find a use someday, especially if I can get it working under Linux, or at least have a Solaris VM act as a bridge so I can shove RDP or VNC at it, it could make a cool interface to some servers. Regardless, I’m glad I have it and will keep it safe in its box. The keyboard, maybe not so much I like it a lot.